Over 325 members of the public in the mid-Atlantic and northeastern states (DC, DE, MA, MD, NC, NJ, NY, NJ, WV, VT, SC) reported a very bright fireball April 16th 2019 at 10:57 PM Eastern Daylight Time. Numerous videos of the meteor have shown up on social media, and two of these – recorded by widefield cameras operated by amateurs (Mike Hankey and the American Meteor Society) – were suited for use in the analysis of this event. Combining their data with the eyewitnesses accounts place the beginning point of the fireball at 57 miles above the Atlantic coastline, 2 miles east of Island Beach, New Jersey. The meteor proceeded slightly west of south at 56,000 miles per hour, finally ablating 16 miles above the Atlantic Ocean, 50 miles due east of Ocean City, Virginia. The brightness of the fireball (midway between the quarter and Full Moon) and the orbit indicate that it was caused by a piece of a Jupiter family comet about 10 inches in diameter and weighing some 60 pounds.

An animation of the meteoroid’s orbit and approach to Earth is at http://fireballs.ndc.nasa.gov/special/Delaware_meteoroid_animation.avi 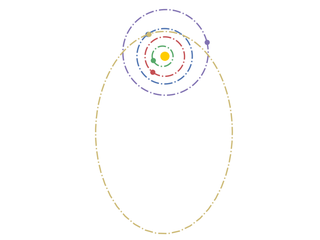